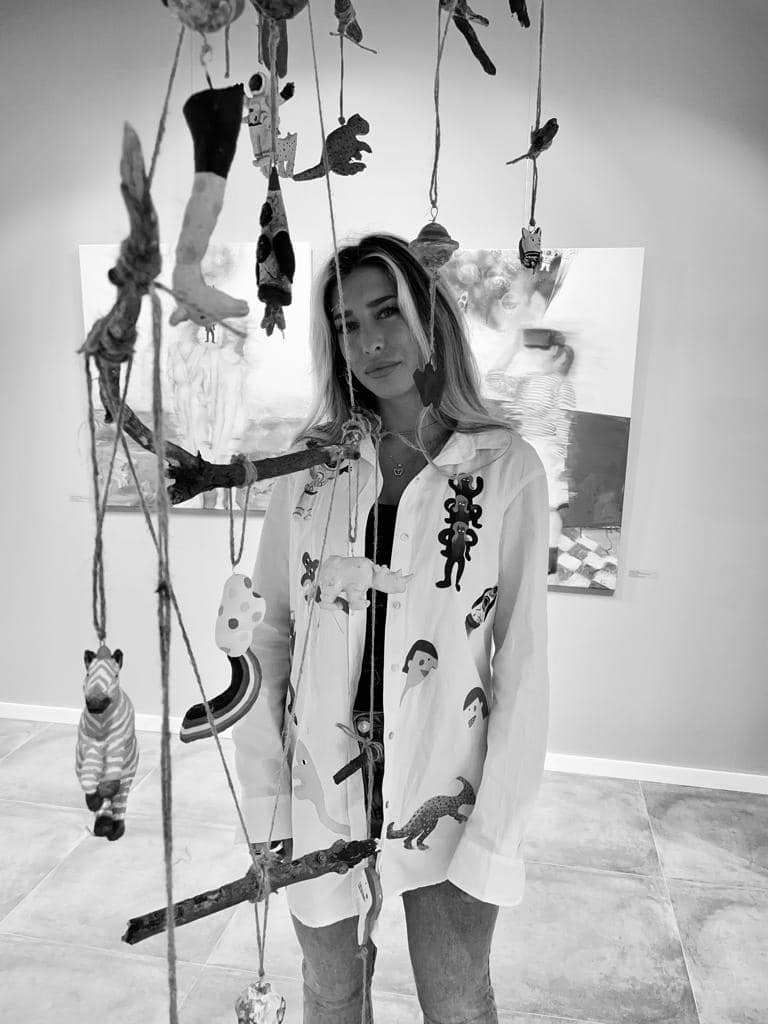 Arina Bican (b. 1991, Bucharest), graduated from the Faculty of Arts and Design, specializing in mural art, from the National University of Arts in Bucharest (2013), specialization in which she has a master’s degree from the same faculty (2015).  She had three solo-shows in galleries in Bucharest and Miercurea-Ciuc and participated in 13 collective exhibitions (Bucharest, Iași, Ploiesti and Lisbon).  From March 2022, Kulterra Gallery is the exclusive representative of the artist.

Despite her specialization, Arina Bican’s works mainly consist of painting on canvas and clay objects. The subjects addressed seem rather grotesque, they are never exhausted, the works in which they are treated seem like samples collected by survey. There are no definitive answers in the works of Arina Bican, rather – a series of delusions, an act of “teasing” if we want, a “what if?” and what not – and proposes to satisfy the viewer, as much as to place them in the same open query by the artist în order to stay open.

Arina Bican gladly allows herself to be stolen from reality and the events that mark her, but she feels just as good within given themes. The pandemic that produced radical changes in the fabric and social dynamics was for her a pretext for optimism, but an optimism whose horizon began from the moment when the pandemic will have ended, the work “After Lockdown”, made in 2020, at the beginning of the quarantine imposed by the pandemic, suggesting a hopeful “after”.

Regardless of the subject, Arina Bican “solves” it through the figurative. There are no works from which people, faces or gestures are absent. Well, strictly speaking, the works really consist of silhouettes, as we see in the case of the clay figurines, made in 2021 (Green Omulet VR and Blue Omulet VR). The portraits executed much more realistically at the beginning, in 2014, lose over time their appetite for photorealism and relax in small bursts of surrealism or expressionism, but without ever falling into the abstract or the schematic. The details remain essential, like their precise execution, only they have migrated around the anatomical, in the folds of clothes or in the shape of the surrounding objects.

Technology, which is not only omnipresent in the universe of her generation, but knows an extremely fast evolution and development, is also assimilated in the art of Arina Bican, the idea of ​​contemplating oneself and the surrounding world through the “gadget” and the platforms of  social media being often captured in her works.  In a way that might seem paradoxical in this context, the explicit references to lon Țuculescu (and his “eyes”) or to popular traditional motifs come to nuance and particularize the work of Arina Bican; in the end, popular motifs are fundamentally nothing more than a stylized message carrier, a code, a set of “emojis” avant la lettre.

All in all, Arina Bican has by no means finished what she has to say, on the contrary, everything she has created until today seems full of the tension of a beginning and induces the need to wait and see what comes next.

A moment when we can only say that we are extremely happy that, starting this year, Kulterra Gallery is with her, as an exclusive representative; so that, even if Arina Bican has been producing art for years, we will be able to say that we have been with her since the beginning.  And that we will be like this until the end.