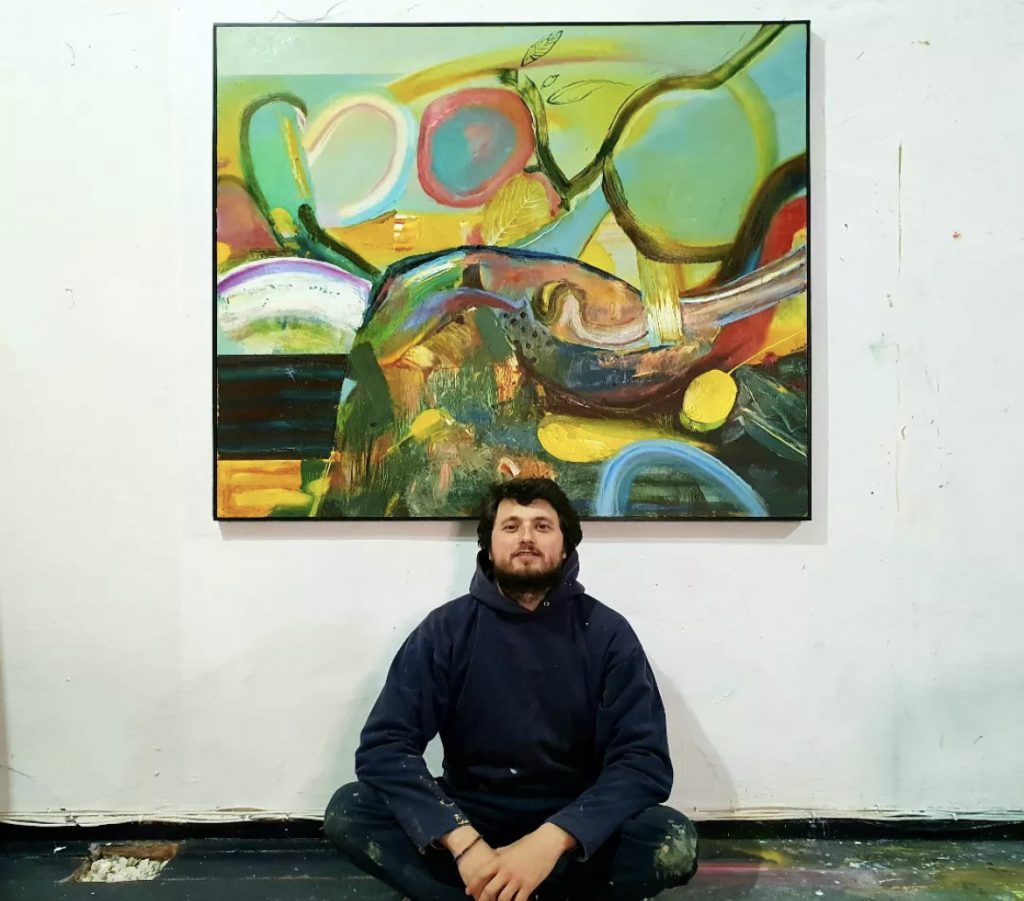 Born on January 5th, 1995, Ciprian Antoci graduated from the Academy of Music, Theater and Fine Arts, from the department of Painting, in Chisinau (2019), where he also received his master’s degree (2021).  He had 3 solo-shows and 4 group exhibitions, participated in several creative camps (especially from Romania) and collective exhibitions.  In 2022 he became one of the artists who are exclusively represented by Kulterra Gallery.

Ciprian Antoci’s art (especially painting and drawing, but also installation, performance or objects) knows a special dynamic, the rhythm and style changing rapidly, sometimes dramatically.  The evident expressionism in the works “Chair” (2011), “Respiration” (2013) “Commuters” (2015), done while he was still a student at the Republican College of Fine Arts “A. Plămădeala” will not be found in his later works.  The serious, oppressive, but extremely suggestive atmosphere, the figures of the characters – the earth, populating a dystopian universe (especially in “Commuters”).

In 2017, he will devote himself more to installations and performance, participating in the exhibition organized in the premises of the Mezon factory in Chisinau, one of the prides of the Soviet era in the Soviet Socialist Republic of Moldova.  The plant was established in 1969 on Bulevardul Moldovei (then called Bulevardul Moscovei), being one of the largest plants producing integral circuits in the USSR.  The exhibition wanted, on the one hand, to draw attention to the precarious economic reality of the Republic of Moldova, left like Romania – without most of the industrial production from the communist period, but also to a heritage that encapsulates not only the private histories of  thousands of employees from the past (and their families), but also a type of aesthetics specific to the profile and era.  The artists worked inside the former factory, using its space and materials.

Ciprian Antoci participated with a video-performance in which he performs an apparently absurd, repetitive work, without an explicit purpose, but with results that, strictly speaking, could be measured.  Production for the sake of production, regardless of the degree of pollution or the amount of residues.  Gestures that depersonalized the worker, but turned him into a tool whose raison d’être was defined by efficiency and yield.

Also in 2017, on a plot of land near the church of St. Olga and Vladimir from Ivano-Frankivsk (Western Ukraine), Ciprian Antoci made an installation of 18 different chairs, painted white, on the backs of which years were mentioned.  Each chair represented, therefore, a year in recent history, or perhaps, conversely, each year represented an empty chair, in which we can sit down to be able to see, from it, the history unfolding in front of us.  Of course, an illusion, because in reality history is not a show we witness, but a show we are part of, beyond our will and choice, even if we realize this or not.  Forgetting makes what happened yesterday an abstraction, a set of figures, dates and numbers that we don’t even remember anymore, ignoring the fact that they are not abstractions, but events that define and determine the present and the future.  By sitting on a chair, you were sitting in a specific time and memory.

“In case of War” (also 2017), Ciprian Antoci created an object, within the Imagomundi Luciano Benetton Collection project.  A “package” with mysterious contents, to answer the question: what would you give a man who is going to war?  We don’t know what’s inside.  We see the package, but the content remains hidden from us, because to such a question, no answer will be able to pass the packaging.

Starting with 2018 (“Body on syllables”, “Breeze”), Antoci returns to oil on canvas. Expressionism can still be felt in the lines that already seem rather inspired by cubism, moving towards the abstract starting from 2020 (“The Space” or “Night in the desert”), in 2021 (“Break and balance”, “Ecstatic shapes”, “Sunset”, “Est Etic”, “Abstract”) and in 2022 (“Energy of sound”,  Energy of song”, “Energy”, “Break and balance 2”, “Abstract in Yellow”).  Line and color impose themselves on the form, Ciprian Antoci tries to capture and reproduce energies, states, a rather quantum universe.  We will not talk about each work separately.

We will, however, mention the work “Exit” (2021), in which the abstract is not complete, in the image we even see an “exit”, a serene world seems to be waiting for us outside, because we, the viewers, are placed in the position of the one inside; a dark interior, sealed off for too long.  We look towards the exit, it calls to us, we almost feel the need to head towards that opening.  Perhaps an exit from the cave described by Plato.  Or maybe it is the perspective of a Resurrection, of each of us, that mysterious moment, when the stone was cast aside.

As far as we are concerned, Kulterra Gallery will do everything to pave the way for Ciprian Antoci, along with the other artists we represent. 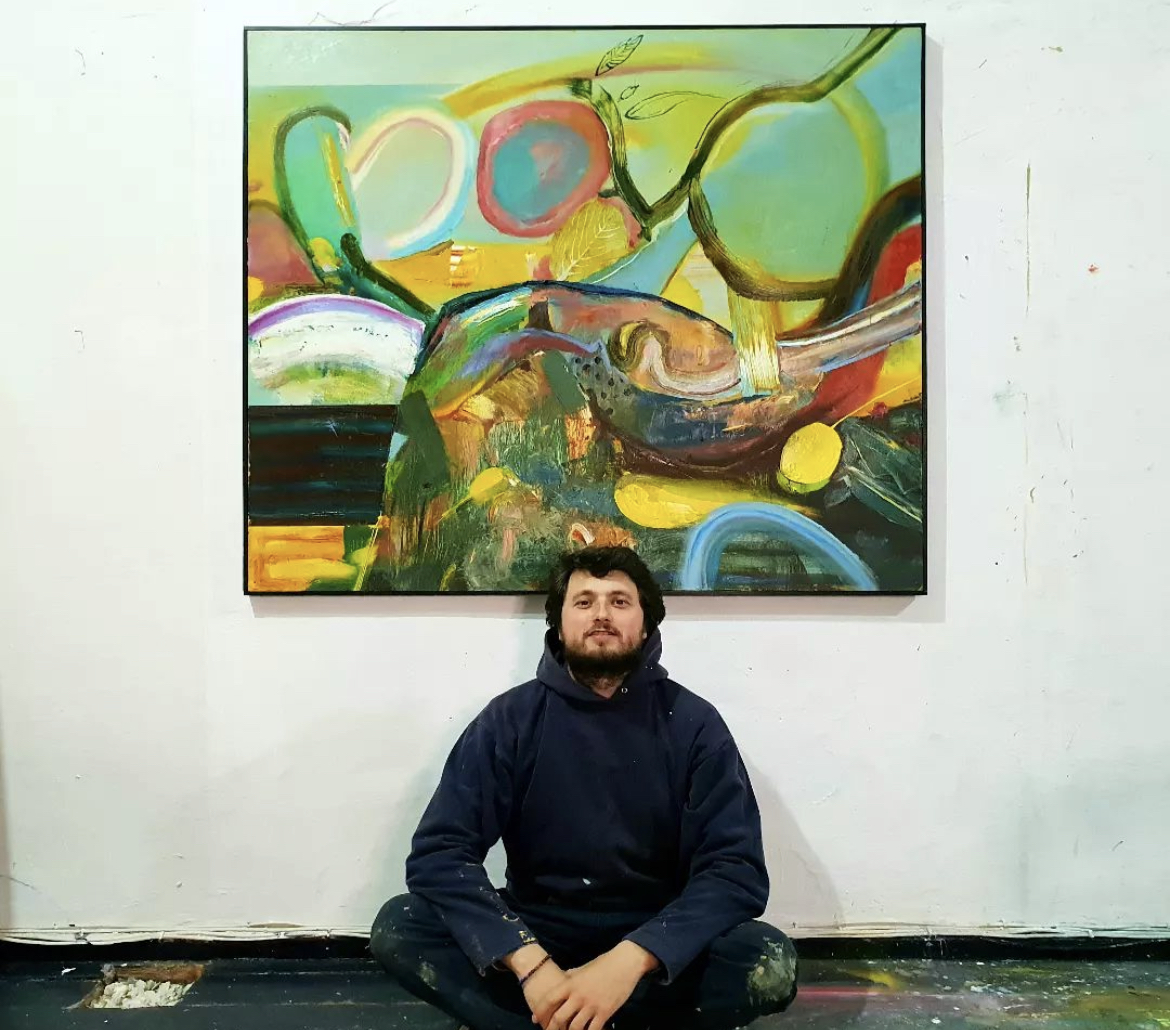