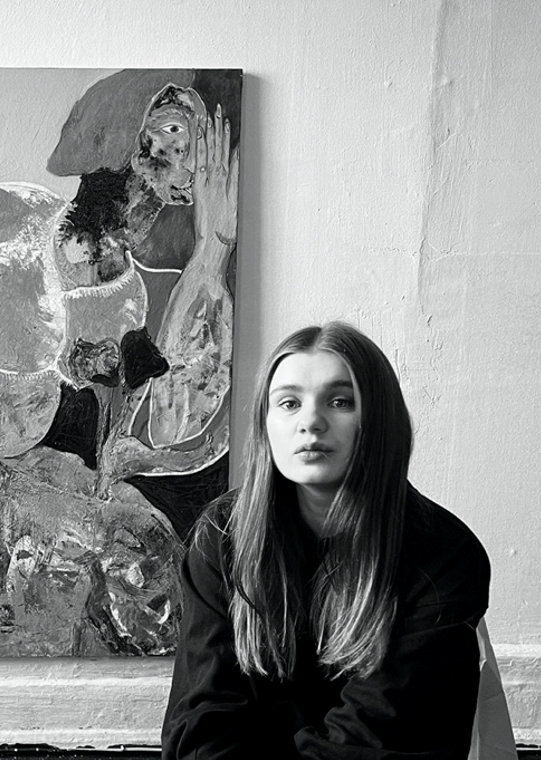 Born in 1996, in the Republic of Moldova, Natalia Romanciuc graduated from the School of Fine Arts and Academy of Fine Arts from Chisinau (2019). She participated in 11 group exhibitions (including those from Kulterra Gallery), had a solo exhibition and two online presentations. Her works appear in private collections from the USA, Russia, Romania, Republic of Moldova, Switzerland, Italy, Great Britain, Austria, Spain, China and Australia.

Natalia Romanciuc’s art can deceive. Apparently solar, luminous it includes and presents syntheses and sometimes dramatic sequences from the artist’s personal life. The characters – exclusively female – are not nothing but alter-egos, coded reproductions of their own personified states. Natalia’s painting is marked by lust, by the pleasure of the act of painting, one feels generosity, but also a type of insatiability, of greed, the artist offering everything, but also consuming everything while painting.

The lines are broad, the colors are full, vivid, and the dynamics and composition of the works put us in the position of relaxation, however, we may find ourselves in front of a destiny with tragic accents. In painting, Natalia Romanciuc does not falsify, she does not translate neither the reality, nor the events she went through or the states she was in, but distills them, filters them until all that remains of them is the essence, which she presents to us seemingly through mannerist and repetitive, though rather canonical forms. Her own canon, like a personal aesthetic language, within which and through which the artist communicates and is communicated.

It can be said that Natalia Romanciuc’s main subject – or main character – is the woman. It would be both true and false. Because Natalia Romanciuc doesn’t talk about the woman, but about herself as a woman. An extremely important nuance. It does not generalize, it does not abstractly theorize, it does not campaign for anything. It just presents itself in a ceaseless quest to discover and understand its multiple emotional profiles, activated in space and time, that compose her life. She herself is the “woman”, in a way in which any woman can be “the woman”, precisely because she is different and the same at every moment. Natalia Romanciuc talks about all women talking about herself, the only woman she can analyze, judge, understand, forgive and correct fully. Motherhood, tenderness, strength, ability to endure and fight back, suffering and healing, the lullaby and the battle cry are all found in the Rubensian curves of the female characters or, rather, of the female character depicted in a multitude of poses.

This experimentation on a “single” body on which the artist applies and activates almost all emotions and possible states, becomes all the more explicit in her performances, in which she paints on her own body, while reciting a true ode to femininity that she, as a real, living, actual person, includes and manifests herself.